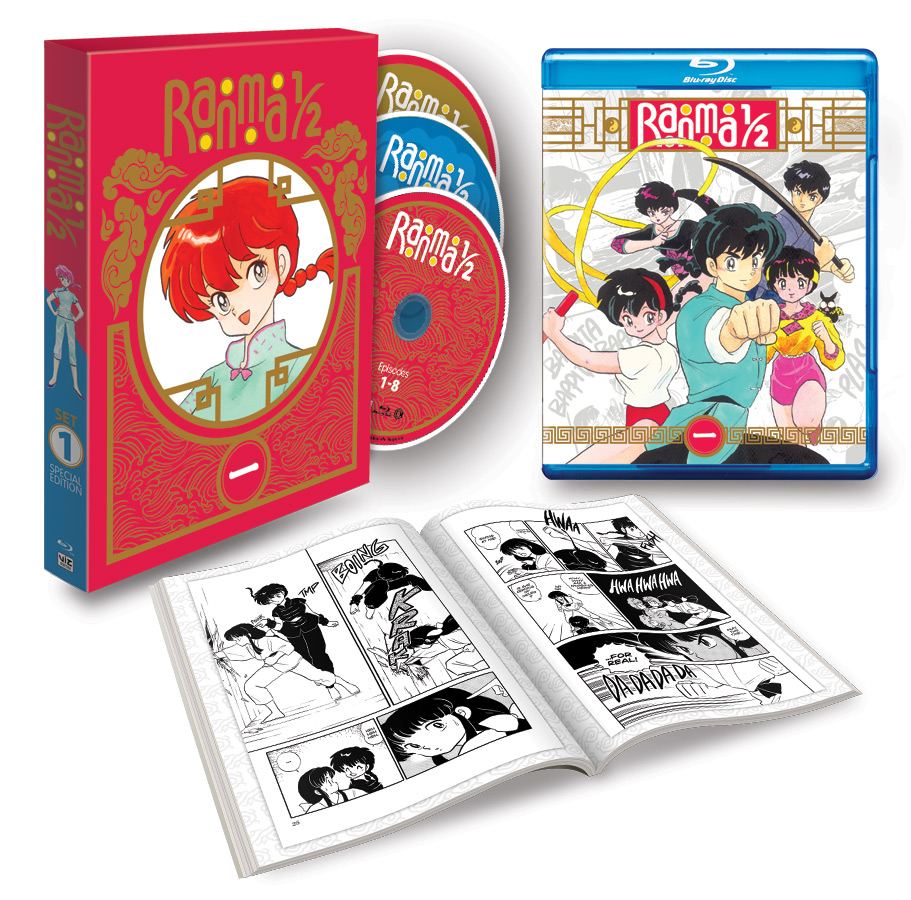 A favorite amongst anime fans, the comic misadventures of Ranma, a teenage boy who morphs into a girl when hit with cold water, and his friends is now available on DVD and Blu-Ray. Ranma 1/2 has appeared in subtitled form through Viz’s website, as well as Neon Alley, since October.

The Ranma 1/2 Blu-Ray set features the first 23 episodes, both subbed and dubbed, appearing in the original order in which they ran in Japan. The show has been remastered in HD. It’s packaged in a red and blue chipboard box with gold foil embellishments and is illustrated by Ranma 1/2 creator Rumiko Takahashi. There is extra content, including panel and interview footage. Plus, it includes a booklet with the episode guide and an excerpt of the recently remastered manga. This is the first of seven Ranma 1/2 sets that Viz Media plans to release. (The second set is scheduled for release in June and will be preceded by the next volume of the remastered manga, which now reads right-to-left and features an updated translation.)

An anime has to be pretty darn special to get a release like this. If you aren’t already a Ranma 1/2 fan, you might be wondering why this is such a big deal. We’ll try to explain that here.

Let’s start with the creator. Rumiko Takahashi is a manga master with decades of hits under her belt. If you became a manga/anime fan in the early 21st century, then you probably recognize her as the creator of InuYasha, an epic time-travel tale that takes place between modern times and the Warring States era of Japanese history. Prior to that, Takahashi was already an established storyteller. In the late 1970s, she created Urusei Yatsura, a sci-fi, romantic comedy about a teenage boy and an alien. Ranma 1/2 launched close to a decade after that and, while it has a lot of romantic comedy elements as well, it’s more of a supernatural tale.

In Ranma 1/2, the title character and his father, Genma, seek adventure as a means of continuing their martial arts studies. They travel to China, ready to fight along a series of mysterious springs. When they fall into the springs, they’re cursed to change into those who previously died there. Cold water will turn Genma into a panda and Ranma into a girl. Upon returning to Japan, Genma comes into contact with an old friend and the two decide to betroth their children. Ranma is now engaged to Akane, herself a skilled martial artist who must literally fight off the boys when she goes to school everyday. The essential premise here is that you have two cursed people, plus two parents who want to marry off their kids and two kids who don’t want to marry each other. Add to this a whole slew of quirky characters, from Akane’s scheming sister to the high school Kendo star whose brains don’t match his brawn, and you have a great comedy series.

Ranma 1/2 succeeds because there are multiple styles of comedy at work. The over-the-top battle scenes are slapstick gold. Ranma and Akane’s initial aversion to each other is classic romantic comedy fodder. But, what drives the story forward are the well-developed characters. Ranma is competitive. Even when he’s in girl form, he might brag that he’s a hotter chick than Akane. Meanwhile, Akane is fed up with all the creepy attention that she gets from the local boys and that dictates her reactions, which may involve some serious ass-kicking. But, the series isn’t just about them. By and large, the supporting characters are as complicated and well-developed as the protagonists.

“The characters are lovable, but they’re not all good people,” says Charlene Ingram. “It’s funny to watch characters who aren’t always perfect have their little trials and tribulations.”

Ingram is the Senior Manager of Animation Marketing at Viz Media. She’s also a longtime fan of Ranma 1/2. Ingram fell for the series at the end of high school and beginning of college. It was different from the comics she normally read, like Neil Gaiman’s Sandman. “It was just happy and fun and effervescent,” she says of Ranma 1/2.

“I never would have thought that I would start working on Ranma,” she says. But, since Ingram has been handling this campaign, she has seen firsthand how the popularity of this series has expanded past those who caught it in the 1990s. Ingram has seen a lot of younger anime and manga fans enter the Ranma 1/2 fold. “Most of them weren’t even alive when Ranma first came out,” she says. “Kids in middle school and high school are just discovering Ranma and it’s totally new to them.”

That Ranma 1/2 is picking up a new generation of fans is part of what makes this series so special in the constantly-evolving world of anime, where titles can go out of print and be quickly forgotten. “You don’t see that very often,” says Ingram. “It’s very, very rare that a series has such staying power.”

I’m neither a middle school nor high school kid, but somehow managed to miss out on Ranma 1/2 until recently. InuYasha was one of my favorites back when I started to watch anime more regularly. Watching Ranma 1/2 now, it’s hard not to draw the comparisons between the two shows. As Ranma and Akane’s relationship grows, I can see the parallels between InuYasha and Kagome. Ingram notes that, with Takahashi’s work, you can see the connections between the stories. “It’s not always apparent when they’re actively running,” she says. “You see how they all fit with each other.”

I asked a friend for his opinion on Ranma 1/2’s staying power. Mike Ott is a web designer in Madison, Wisconsin. He’s also a pretty big fan of the series. In fact, he has a tattoo of the character Shampoo  on his leg. Ott discovered the series in college, when a friend popped a cassette into the VCR. I asked him why he thought the series was still relevant. “I think it is still relevant because relationships are still relevant,” Ott answers. “Friendships are still relevant.” He notes that, while the look of Ranma 1/2, is reflective of the era in which is was made, it’s what is beneath the surface that stands the test of time. “The themes, story and humor all find their own places in today’s world,” he says. 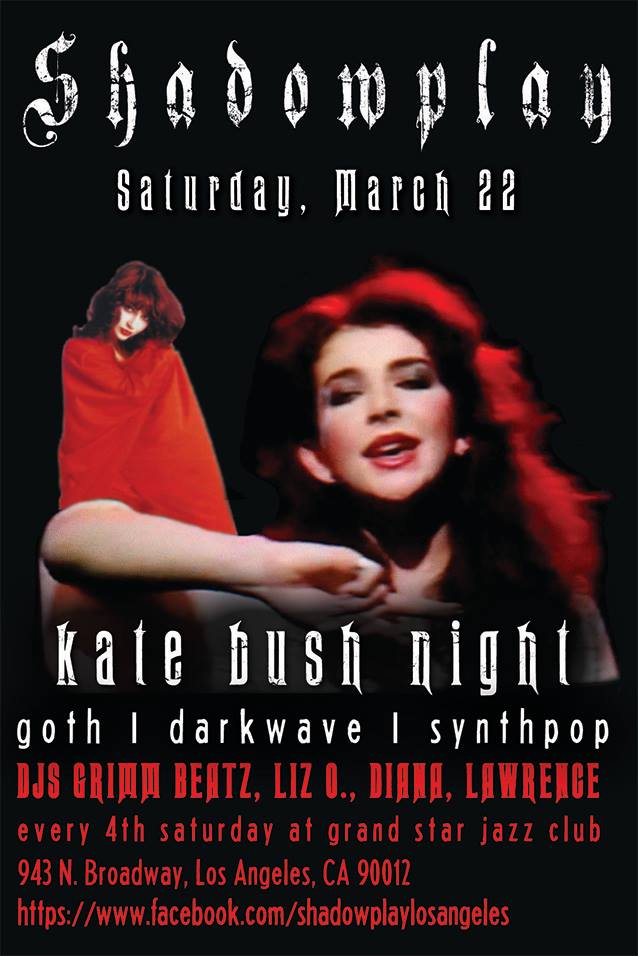 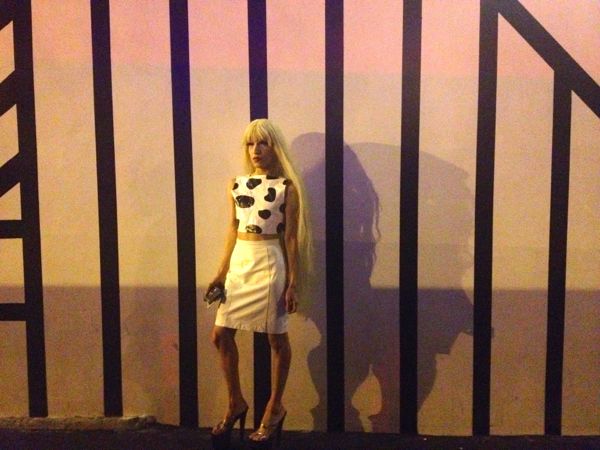 I heard through the grapevine that a Tuesday night party at The Lash called Play Station was doing cool stuff. Last week, I checked it out for myself.

The free, weekly bash is a lot of fun, with an emphasis on up-and-coming DJs and new sounds. Read my story about in Paper.

Here are a few more cell phone snaps from the party.
END_OF_DOCUMENT_TOKEN_TO_BE_REPLACED

On the second Thursday of every month, I join my pals Verdilak at Begbie at Alpine Village for Jupiter 8. We play synthpop, electro and industrial tunes for your dancing pleasure.

This month Fractured Transmission and D/Sir play live at the party. We’re pretty excited about this and would love to see you there too. Jupiter 8 is 21+ only at Alpine Village in Torrance. Party starts at 10 p.m. and the cover is $5. For more info, see the Facebook invite. 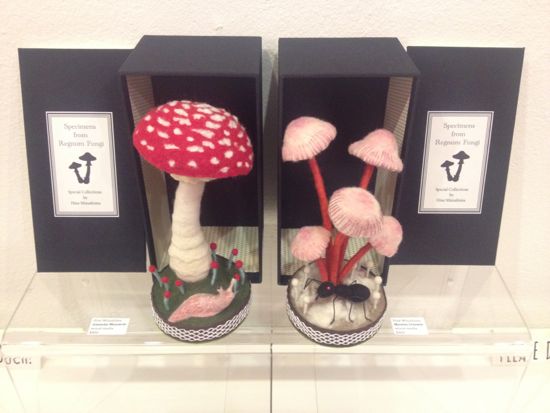 Supahcute is a great art blog and Leanna Lin’s Wonderland is pretty awesome store. When the two collaborate on an art show, you know it’s going to be good.

Last Saturday, “Supahcute Science Fair” opened at the Eagle Rock boutique. It’s a group show filled with adorable, kid-friendly art that is all inspired by science. Check out photos below the jump and ready my story “Can Science Be Cute?” in L.A. Weekly.

Some pieces are still available for purchase. Check out Leanna Lin’s website for more info.
END_OF_DOCUMENT_TOKEN_TO_BE_REPLACED 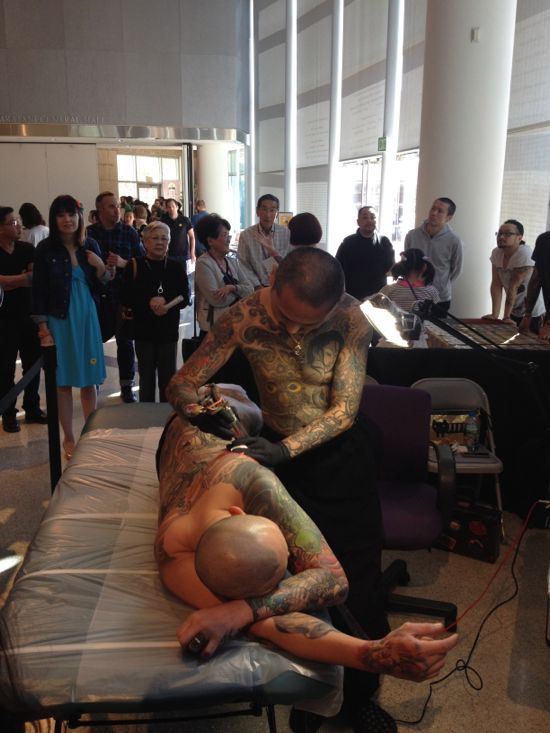 Right now, the Japanese American National Museum in Little Tokyo has a great exhibition on Japanese tattoos. It opened on Saturday and runs through the summer. It’s a big, nicely curated show that gives a lot of insight into the history and future of these massive and intricate tattoos.

I don’t have any tattoos, thanks to a fear of pain and an inability to make up my mind about what kind of art I want on my body. However, I think tattoos are gorgeous. That’s why I headed down to the opening festivities on Saturday. People showed off their body art. Some of the best artists around did live demonstrations.

Check out the photos below the jump and read more about the event in my story for L.A. Weekly, “Japanese Tattoos as Fine Art.”
END_OF_DOCUMENT_TOKEN_TO_BE_REPLACED

Beat Swap Meet happened again in Chinatown yesterday. Of course, I picked up some new-old records for myself. You can check out those purchases in the above photo. I’m kind of excited to play “I Want to Touch You” by Catherine Wheel on vinyl sometime in the near future.

I also got to play at Beat Swap Meet yesterday. Here’s the set list.

The Clash– This Is Radio Clash

Echo and the Bunnymen– Heads Will Roll

Fad Gadget– Back to Nature

I have to gigs coming up this week. On Thursday, you can catch me play at Club Berlin at Alpine Village in Torrance. On Friday, I’ll be at Underground at the Grand Star. 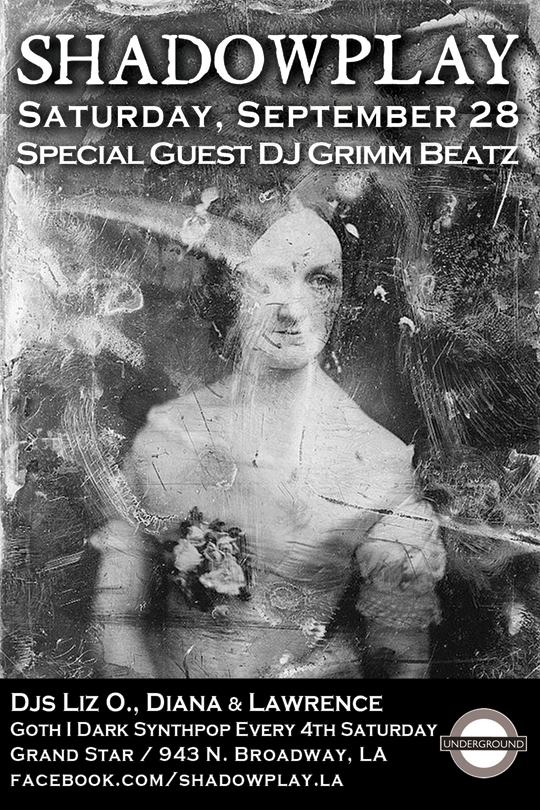 Feel like dancing or just hanging out and listening to some good tunes this month? I have four gigs scheduled for September. Mark them down on your calendar now. I’ll post more info on these closer to the dates of the events.

People have been talking about Heroes of Cosplay for weeks. Some have a list of reasons for disliking it. Plenty of people in the scene are offended by it. I finally saw the Syfy reality series last night. It was kind of boring. I kept wishing it were more like RuPaul’s Drag Race.

Cosplayers and drag queens have a lot in common. Both frequently rely on pop culture references to push their art forward. Both require a hefty skill set. The best cosplayers, like the best drag queens, are good with costumes, make-up and hair, plus they can perform for an audience on some level. More importantly, though, both are part of scenes that have been wildly misunderstood by the general public.

RuPaul’s Drag Race is good TV. It’s a fun competition with a lot of big personalities in the running. Yet, there are also a lot of heartfelt moments on the show. When you’re watching it, you know that there’s something greater to it than over-the-top costumes and lip-sync performances. It’s a show about identity and community. If that’s what Heroes of Cosplay intended, it missed the mark entirely.
END_OF_DOCUMENT_TOKEN_TO_BE_REPLACED 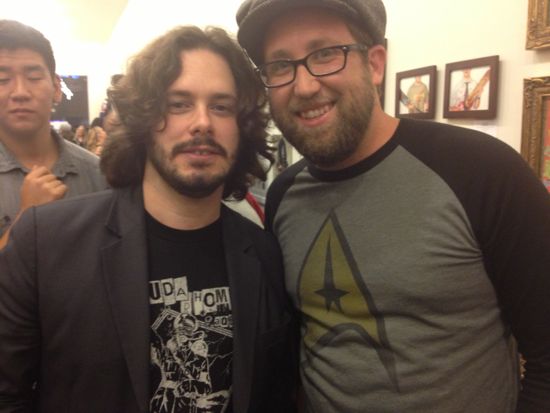