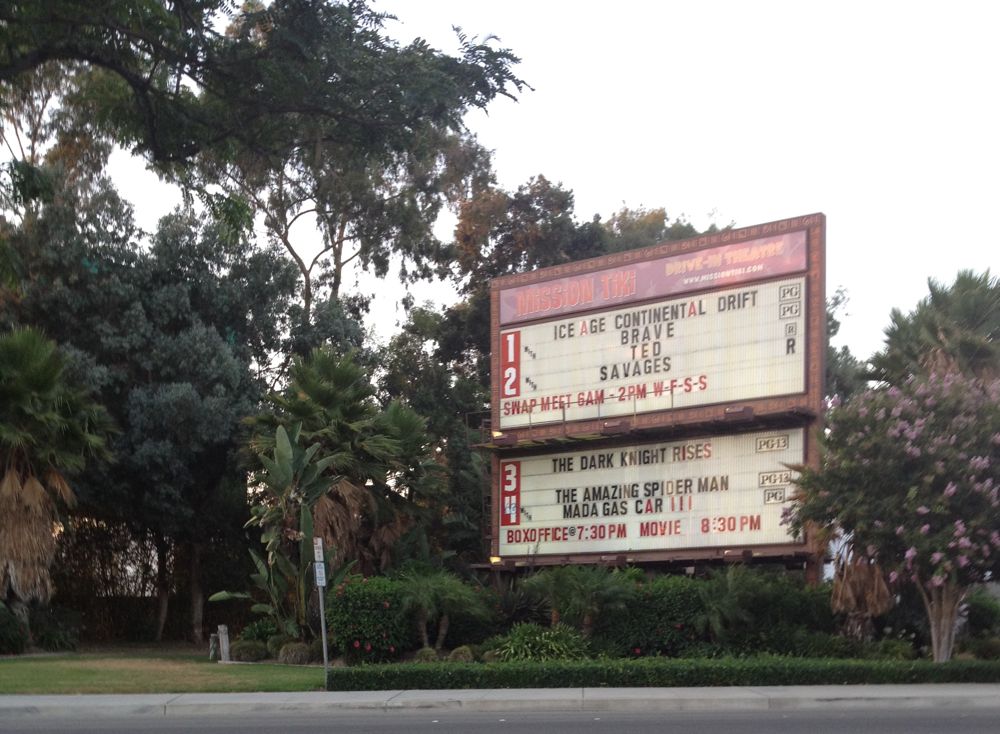 I didn’t think I would be able to catch The Dark Knight Rises for another few weeks. In fact, I had to decline a couple invites from friends to see the movie this weekend because I thought I would be working. Fortunately, I ended up without a weekend assignment (and, after Comic-Con, I really needed that break), so Carlos and I decided to drive out to Montclair to see the movie at the Mission Tiki Drive-In.

Montclair is in San Bernardino County, just on the other side of the county line from Pomona. It seems like it’s really far, but, in reality, it took us less than an hour to drive there from Los Angeles. Considering how often it takes more than an hour to travel fewer than 10 miles in this city,  I think we made good time. Plus, we got to see the latest Batman flick at a tiki-themed drive-in theater. That’s always a win.

Back when drive-ins existed in Los Angeles, my parents used to haul us kids to the theater to see things like Who Framed Roger Rabbit? and Return of the Jedi. We were little kids, so they would pack us the backseat of the station wagon with blankets. If we fell asleep, which we typically didn’t, they could still watch the movie.   At the Mission Tiki Drive-In, a lot of people still do that. They have vans parked with little kids dressed in their pajamas and holding big buckets of popcorn waiting for the movie.

The drive-in is a good place for adults with no kids too. I tend to avoid movies on opening weekend because people irritate me. There’s always going to be someone kicking the back of my seat or some kids acting up in the theater. When everyone is confined to a car, essentially out of earshot from each other, there’s no one to get on my nerves.

Even better is the fact that we can actually talk during the movie because no one is close enough to be bothered by it. Pass judgment if you want, but I think a little talking during a film actually makes the experience better, especially when said film has a lot of plot twists. If you miss a detail, someone else will pick up on it. You can compare notes, like “So, do you think A is really B, or does X mean that Y will happen?” For me, there’s a lot more satisfaction in watching something when I’m actively trying to figure out what will happen next. If I’m sitting next to someone who is doing the same thing and we can actually comment on that during the movie, it’s all for the better.

I’m not really writing about the movie itself. Maybe you’ve seen it. Maybe you haven’t. If the latter is the case, then you will likely get pissed off at me for zomg-ing over it in a spoilerish way. That said, I will say nothing, except that I’m really glad I got to see it at a drive-in theater and I really want Selina Kyle’s wardrobe.