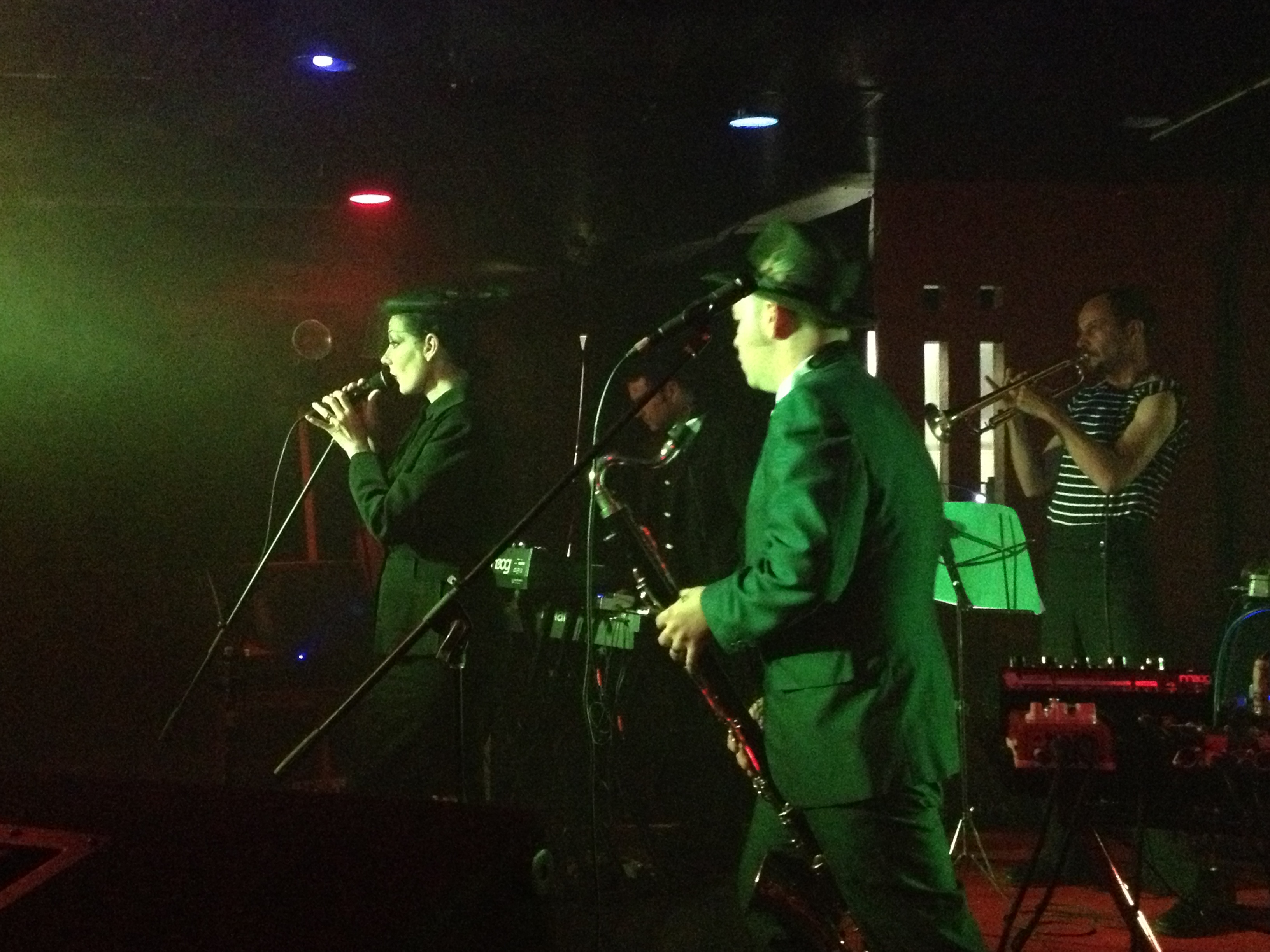 Secret Society of the Sonic Six

We’re sitting on a second-floor patio of a building on the side of Chinatown near Union Station. We’re high enough above street level to watch ant-sized cars creep downhill from Dodger Stadium. I wonder if there is going to be a mad rush into this neighborhood to grab a French dip sandwich at Philippe’s before they close in another hour or so. If that happened, I didn’t notice. The streets are already lined with parked cars. Maybe people just left after the 7th inning to get their sandwiches.

Inside the club, the bands– Secret Society of the Sonic Six and Deathstrip– are sound checking. It’s loud enough where we can hear the music clearly on the patio. We’re also near a glass door, so it doesn’t take much of a stretch to peer inside. It looks and sounds like this is going to be a special night. It is.

Sometime after 10:30, Deathstrip heads towards the stage for the actual performance. This is the band’s first live gig, but you wouldn’t notice that. The singer is Fate Fatal from The Deep Eynde. That’s a band that has been ruminating in the L.A. goth scene for well over a decade. Fate was actually amongst the first group of musicians that I interviewed, way back when I was a college kid hosting a radio show on KXLU. I got to talk to him a bit before the gig, which was great. We hadn’t seen each other in years. 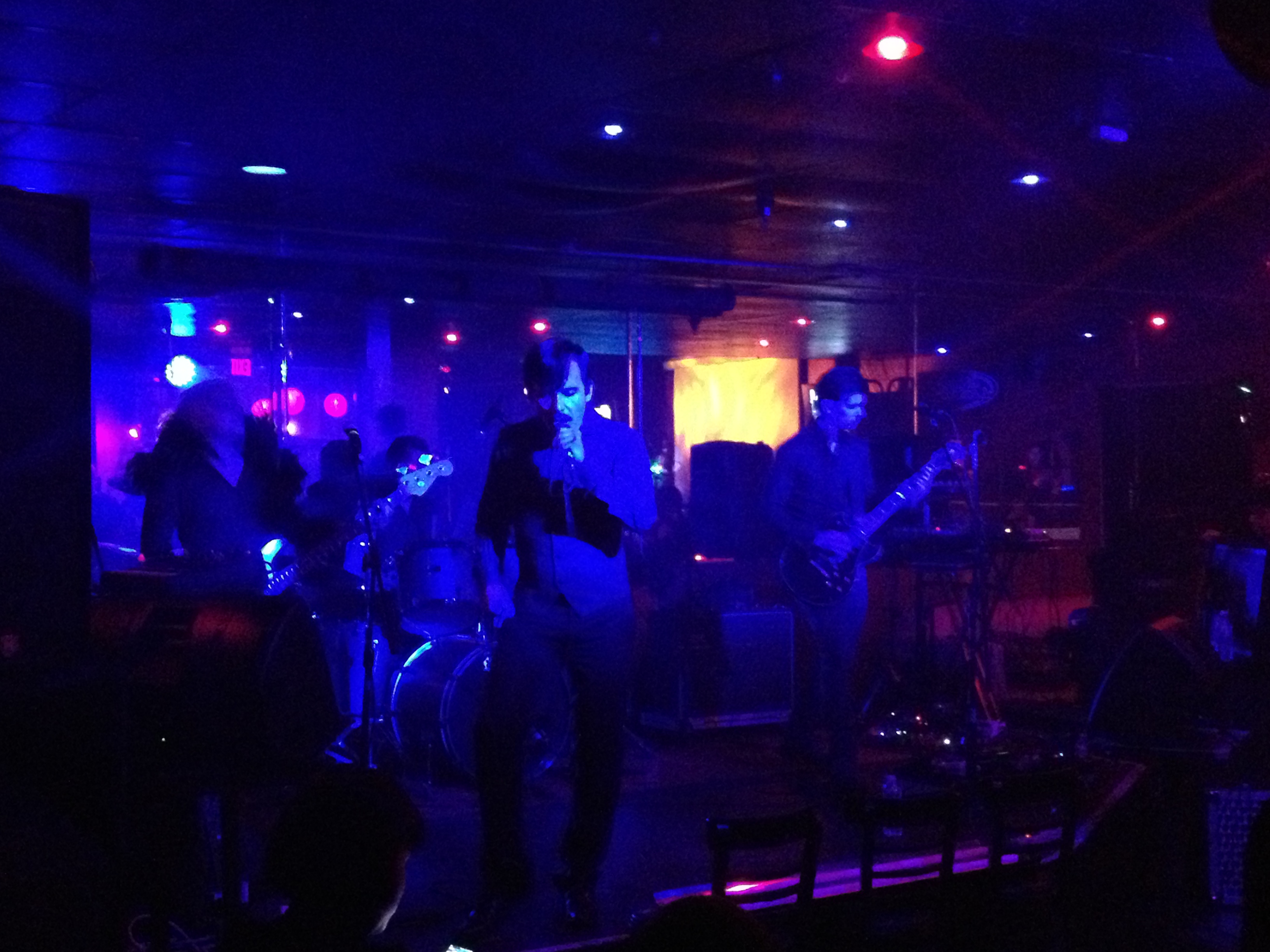 Deathstrip was fantastic. Fate has always been a great performer, but he’s even more captivating now. Back in the days when I used to see Deep Eynde play a lot, he wore outrageous, elaborate costumes that became part of the show. On Saturday night, with Deathstrip, he was on stage in a simple shirt-vest-pants combo. I think that let his between-song banter become a focal point for the performance. Fate told a tale about happening upon a sordid scene on the Metro before dedicating one song to the MTA. He spoke often with humor and passion and everything you want to hear from the frontperson, if you you’re never quite able to hear the whole thing. During the songs, his voice was deep and powerful and he jumped on and off the stage as though he knew that’s the moment that the smoke from the fog machine would hit him and it would look totally dramatic.

Earlier in the evening, while I was playing my first DJ set of the night, someone came up to the booth. I can’t remember who the person was. It happened so fast and my eyes are always darting towards the records or CDs that are playing or will be played. The person handed me a Deathstrip CD. I’m listening to it right now. There are only four songs on it. The sound is raw, but strong, a really good indication of what the band sounds like in a live setting.

The Secret Society of the Sonic Six headlined. Recently, the band experienced some line-up changes and went through a sonic metamorphosis of sorts. Older songs were reworked to fit what they’re doing now. The set was quite compelling. The band has a cool film noir sensibility. Astara Ivanka looks so natural as she pulls off ’40s film star poses while she’s singing. Chadwick W.D. occasionally jumps in with incredibly sinister-sounding vocals. I don’t know how they did it, but the band manages to sound both synthier and heavier on the horns now. It’s a really unusual sound, but it’s also a more accessible sound. I’m really excited to hear what they do next.

On the DJ side, I played the opening set and then again in between Deathstrip and (((6))). Andy Smith, from the band Peeling Grey, played after (((6))). His set was great. I loved hearing Nina Hagen’s cut “New York/N.Y.” on the dance floor.

My set list is below. For those of you who were there, thanks so much for coming.