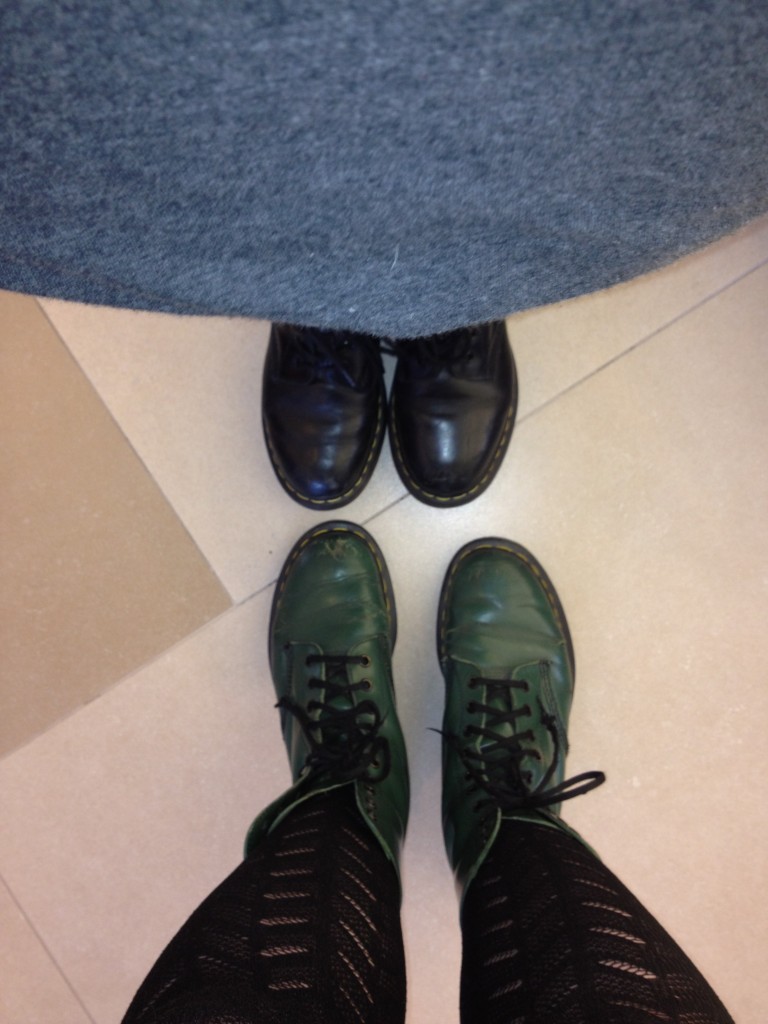 I’m writing this post a week after the events took place. The only thing crazier than Comic-Con is the madness that happens after the fact, when you’re back in L.A. and your thrust once again into the non-convention life while you’re still trying to write about what happened. There was daily freelancing, the Andrew W.K. story for Hard Road to Rad, the Amanda Palmer show I covered for L.A. Weekly, the DJ gig at Underground last night.

Saturday is really the last big day of Comic-Con. I go on Sunday as well, but since that is the end of the road, most of my time is spent checking out of the hotel room, packing up the stuff I bought and hauling it all to the train. Sunday is for saying goodbye, but Saturday is the last hoorah. This year, Saturday was also Super Awesome Day for me at the convention.

I can’t remember what we did most of the day. I think I followed around Shannon on her quest for more cosplay. That evening, we met up with someone for an interview. I’m not going to say who it is until because I still need to get through a very long transcription, so I’m not sure of the run date. I will say that it’s someone we’ve gotten to know pretty well from Comic-Con and someone who can’t seem to walk through a hallway without being stopped for photos at least once. The interview went really well and, without saying too much, it was one of those chats where you come away from it feeling pretty inspired to do your own thing. Those are the interviews I like best.

After that, Shannon took off and I headed to the “Tromatize Yourself” panel, which was the best of the educational panels I attended. If you want to learn how to market yourself, listen to Lloyd Kaufman, especially when it involves a screening of Brand Your Own Damn Self, which features Kaufman and Stan Lee.

Following the panel, I was at a loss for what to do with myself, so I texted some friends of mine. They were hanging out that Marriott. I met up with them there, ended up back at the convention center in silent hallways charging our phones and then wandered with them towards the Hyatt.

The bar at the Hyatt is always packed on Saturday night of Comic-Con. It’s almost all industry people, dressed up and networking with drinks in hand. When you walk into the bar, you’ll hear nothing but a roar that sounds almost like a wind tunnel. That’s how many people are inside chatting.

We didn’t really network. Maybe we should have, but we didn’t. Maybe we did something better. We plotted our revolution for SDCC 2013. It started with me moaning about not having my comic finished. Then one friend mentioned something that she wanted to do and so did another and another. All of a sudden, we were bouncing ideas off of each other, ready to get our own projects done. It was the best moment of the weekend, maybe of my year so far. We’re going to make awesome stuff.

I kind of mentioned this in my L.A. Weekly blog post, “Top 7 Lessons Learned at San Diego Comic-Con 2012,” but I’ll mention it again, inspiration is the most important thing about any fan convention, especially Comic-Con.

I often get really irritated because so much of SDCC focuses on the commercial aspects. It’s not that I hate commercialism, I definitely buy stuff at SDCC when I’m there and I get excited about new shows and movies all the time. But, SDCC isn’t a shopping mall with really cool preview footage. It’s a place of opportunity. With so many creative people in place, anything is possible. I know that well and, for the most part, I had been feeling like I was wasting my own potential. Okay, so I didn’t have anything worthwhile to show people this year at the convention, but next year, I will. I know that this will happen because I have friends who will kick my butt if I keep procrastinating. Naturally, I will return the favor.

If you’re a working creative person, the best thing you can do is find a group of friends who are in the same boat. They’ll push you to do your best work and you’ll do the same for them. These people aren’t easy to find, but you have a better shot of locating them at Comic-Con. That’s why I will continue to go to the convention year after year, even as it becomes more mainstream. Ultimately, SDCC isn’t about the big promotions or the celebrities or the geekend warriors. It’s about getting shit done and finding the people who will help you do that.

Now, if you’ll excuse me, I need to write Princess Celestia a letter.