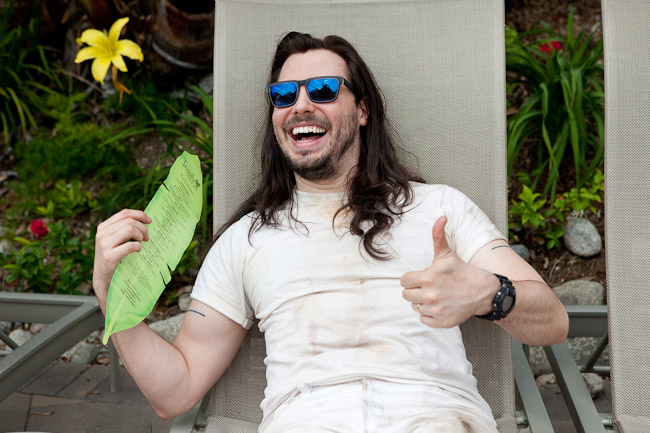 Andrew W.K. teaches us how to party. (Photo: Shannon Cottrell)

By Friday morning, San Diego Comic-Con was starting to drag. It wasn’t particularly bad, but something was different this, something was missing. I couldn’t quite place it.

I haven’t been going to Comic-Con for that long, only four years, so I never experienced the convention without the crowds or the big movies and TV shows. Despite the size, though, it was magical, like a nerd Disneyland. There were massive street marketing campaigns and loads of people in costume (not as many as Anime Expo or Dragon*Con, but still a lot). If you walked around the Gaslamp Quarter after dark, you could still see crowds of people running around in costumes from party to party.

Thursday night, I tweeted that the drunk dudes were on the prowl in the Gaslamp Quarter. A friend of mine who used to live in San Diego responded that this is what the Gaslamp Quarter is like every night. She’s right. I’ve been to this neighborhood outside of Comic-Con and it sucks. Walking down the street requires stepping over at least three people puking in a gutter while booze-blind guys catcall you. It’s pretty much the worse place on earth. During Comic-Con, though, the neighborhood temporarily changed to drunk nerds, who are, overall, more enjoyable creatures. There’s nothing like eavesdropping on Star Wars rants at last call or going off on a Star Wars rant at last call yourself. Nerds can party too!

But, this year, the Bros (not to be confused with Bronies, who I think are wonderful people) had commandeered Comic-Con. So, while my awesome boyfriend, who went to SDCC long before I did, was back in L.A. reading Kull comics because we couldn’t buy a badge for him, there were dudes wearing other people’s badges and talking as though they never read a comic book– or, possibly, any kind of book–  in their lives. (Trust me on this, I unwittingly conversed with a few.)

Comic-Con was starting to feel like the last time I went to Coachella, which was 2010, when the crowd had grown so big, so mainstream, that I felt like I didn’t belong there anymore. Where was the magic and the sense of camaraderie at SDCC that made me countdown the days to every convention? 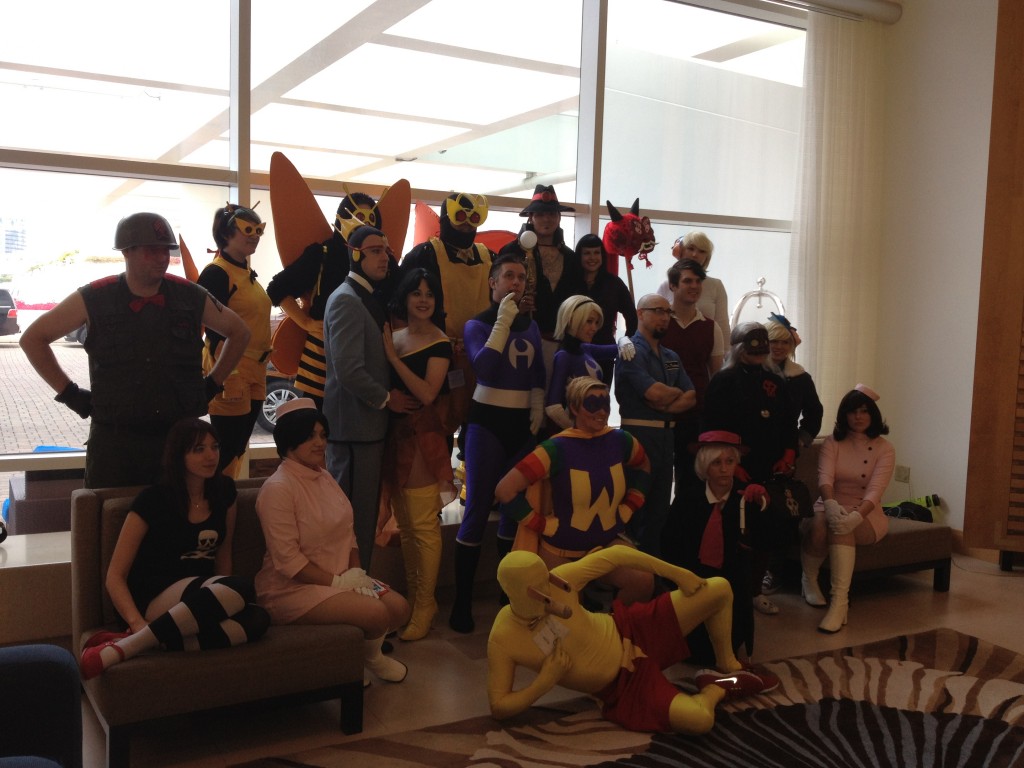 Friday marked the first time I was able to walk into a Venture Bros. panel without standing in line. I can only presume that’s because people were still in line for the Firefly reunion. It was a good panel. I liked that they showed the new backgrounds, character designs and animatics. Mostly, though, I liked running into my friends and having the chance to grab lunch with them.

At some point in the afternoon, Shannon and I met up Andrew W.K. We’ve interviewed/photographed him before, but there’s always something new with him. You can read the story in our latest Hard Road to Rad column.

The reason I love talking to AWK is because he’s so filled with positivity. He says these things that seem completely off-the-wall in a deadpan voice and, after a few seconds, you realize that he’s really onto something. If you read all the amazing quotes from him in the story, you’ll see that he’s talking about how we’re in charge of making our lives a party. I took that message to heart. Bro-Con be damned, I was going to have a good time. 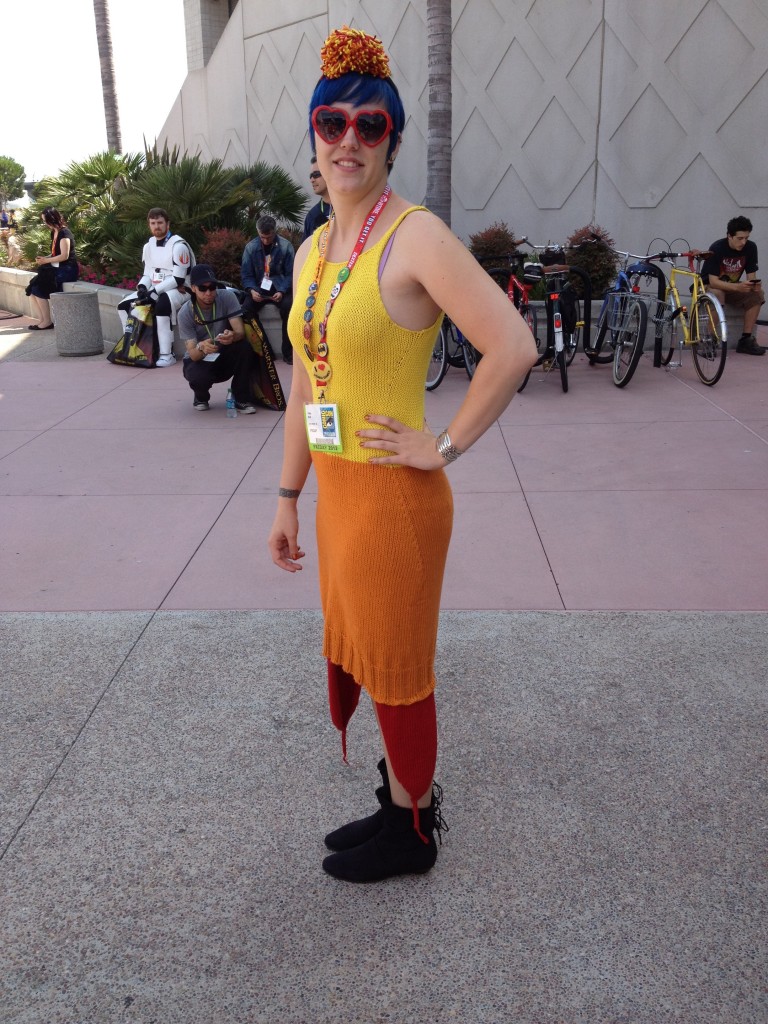 Friday had turned into epic friend day. Later on, I saw my pal Elsha, who was dressed as Jayne’s hat from Firefly. Another friend of mine showed up as Cersei from Game of Thrones, with her husband dressed as Littlefinger and her son dressed as Tyrion. I kept asking her to do the Drunk Cersei Rant and she obliged, repeatedly. 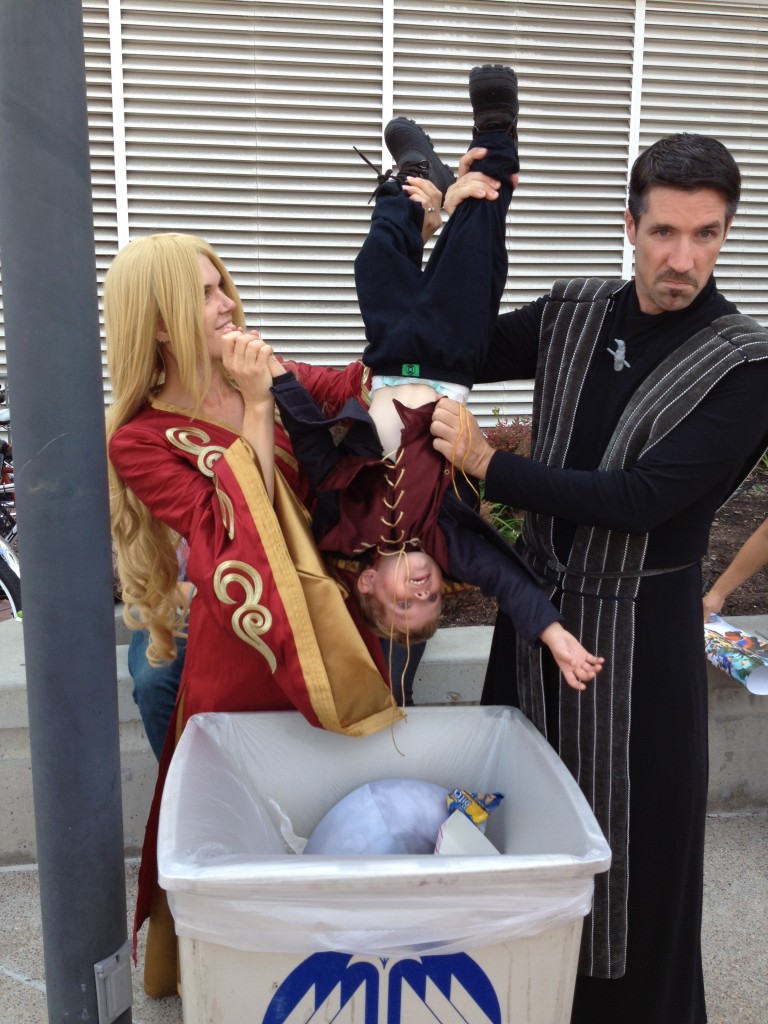 Later on, Shannon and I did the whirlwind party tour. We stopped by FEARnet’s bash, where we picked up awesome swag bags and had our photos taken. Then, we made our way to a massive aircraft carrier to watch Dethklok before walking to 4th & B for the Andrew W.K. show. Sometime around 2 a.m., after Shannon and I had parted ways, I ended up eating gyros with my Defective Geek roommates and I realized that Comic-Con was still fun.