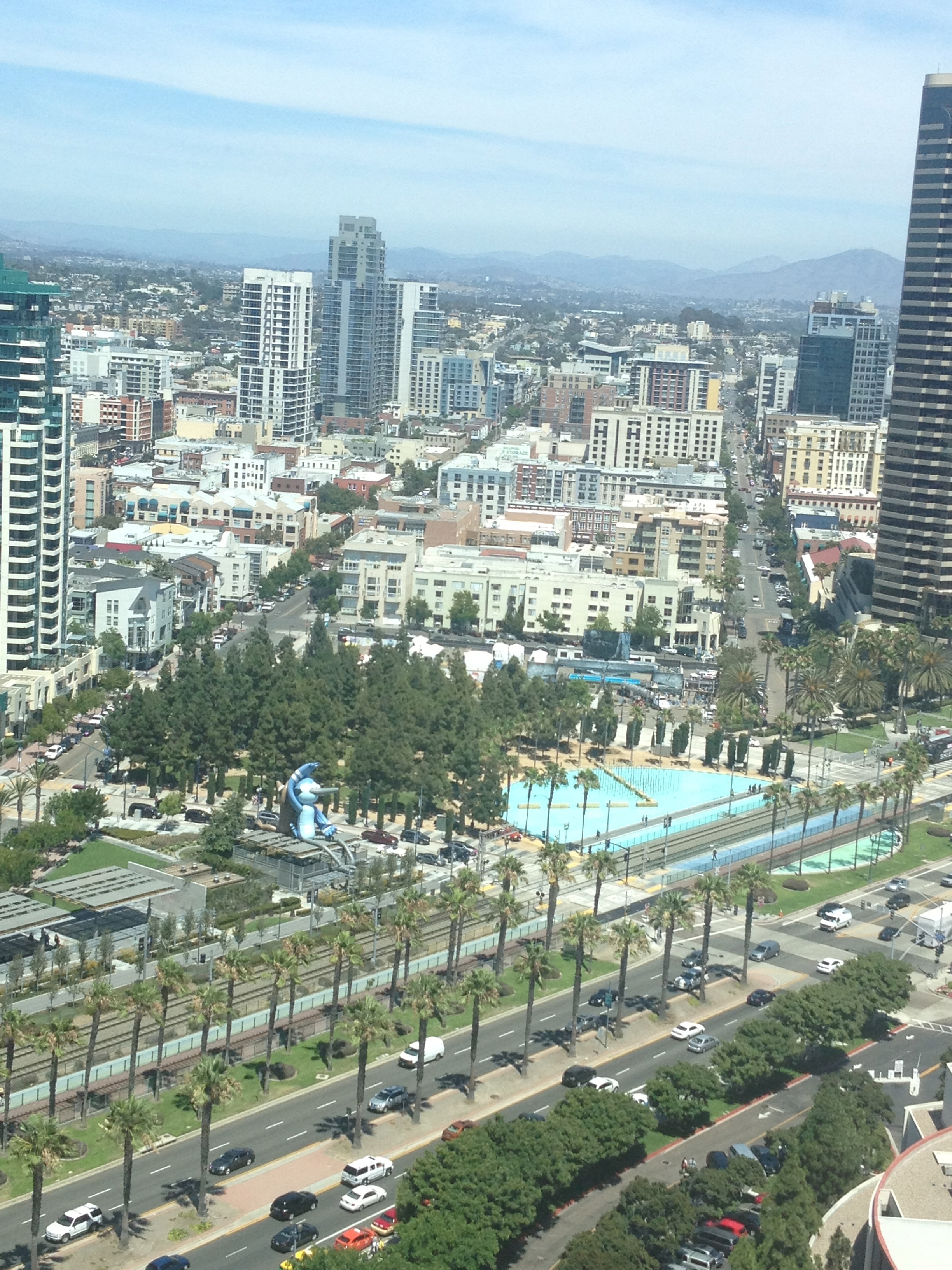 This was part of the view from our hotel room.

It took five years to get here. When it finally happened, it had more to do with my friend’s luck than my own.

Three of us entered the hotel lottery. We did this last year with mixed results. This time, though, we were methodical. We bumped up the amount we were willing to spend on a room. We made sure that a few of our choices overlapped. On the day of the lottery, each one of us managed to submit our picks in well under a minute. In the end, we all got hotels within a few blocks of the convention center. G scored the fanciest of the lot, the one with the bar that brings in the industry folks, the one that is the shortest walk from the convention center.

G led me to the room, opened the door and instructed me to look out the windows as soon as I set down my luggage. To the right was a harbor dotted with yachts. To the left was the city. I could see inflatable versions of Mordecai and Rigby, the characters from the regular show, perched high above the crowd the was just moving in for the next few days.

We had to enjoy the moment, relax a bit in the posh hotel room now because everything would change once the convention starts.

Preview night is, traditionally, the time when an exclusive group of convention-goers can check out the exhibit hall and call dibs on merchandise, some of which will only be sold here, before the rest of the crowd arrives on Thursday. These days, Preview Night is so busy that it’s not terribly different from the rest of the convention. Still, I go because it’s one of the few times that I can check out the floor without worrying about the interviews I have scheduled and the stories I need to file. Preview Night is my chance to experience the con without the threat of deadlines looming over me. It’s the only time when I can make sense of the convention in the moment and create some sort of memory that will stick with me.

After tonight, everything will blur together, a string of stories filed and conversations held. I won’t be conscious of the day of the week or the time of the day. This will all become part of some muddy recollection of con. Even now, a week after this all started, Preview Night remains the only thing I can recall clearly. This was the time where I took the most personal photos and updating the social media accounts regularly. I don’t know if that’s why I remember it best.

We checked out a friend’s booth in the exhibit hall. Somewhere else, I saw a Pullip that I really wanted. I told myself that I would think about getting it later. Then I realized that I totally shouldn’t be spending money on dolls right now, even really beautiful ones with goth mermaid fins.

We met up with some friends and went to some fancy restaurant at the Marriott, ate appetizers and left hungry. Headed to Ralph’s to get food and booze. Landed back in the hotel room with some pals from San Diego. Ate, drank, watched Adult Swim.

That was Preview Night, stuck somewhere between normal life and con life. After that, things would be far less ordinary.

Check out my San Diego Comic-Con coverage for L.A. Weekly:

“Why Regular Show Is So Huge at Comic-Con This Year”

“Why Comic-Con Is Really About Community”