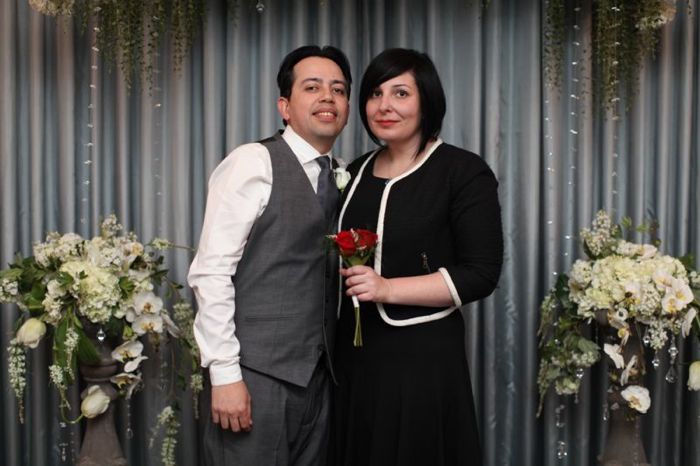 Downtown Las Vegas looked like downtown Los Angeles was a decade ago, a city center on the cusp of gentrification. There’s an art district, some hip bars and buildings that might house lofts. Still, there’s a seedy vibe that gets stronger as we veered closer to the Marriage Bureau. At 8 p.m. on a weeknight, the neighborhood was nearly desolate. There were a few stragglers here and there. They looked familiar, as though I had seen them on Cops.

Inside the Marriage Bureau, the line was short. At most, five couples stood in front of us. They were mostly touchy-feely, but not enthused. There’s a distant look in their eyes. Whether that’s the result of jadedness or the glare of casino lights remains unknown. They were wearing flip-flops.

The previous afternoon, we decided to go to Vegas and get hitched. We had just enough time to get a ring and some new outfits, score a deal on a room at Paris and squeeze in haircuts before we gassed up the car and headed out to the desert. It took about five hours to get to Las Vegas, another hour to settle into the hotel room and change into our wedding clothes and about a half-hour to find the Marriage Bureau. Now we were filling out applications in pencil. Sober. I later learned that this is not how you get married in Vegas.

There’s a blonde woman behind the counter who looks older than she probably is. She sifted through the papers, all the while talking to her co-workers. My giddiness was tempered by her workaday instructions. I no longer felt like I was getting married. I felt like I was trying to pay a parking ticket.

I knew that Carlos was the guy I would marry back in early 1999. He was on stage playing with a band you may or may not know inside a divey club that no longer exists. We were already seeing each other sort of on the sly. It’s a long story. Point being, we decided back then that we would take things slowly and we did. Our first kiss was in December of 1998. Our first husband-and-wife kiss was in April of 2013. 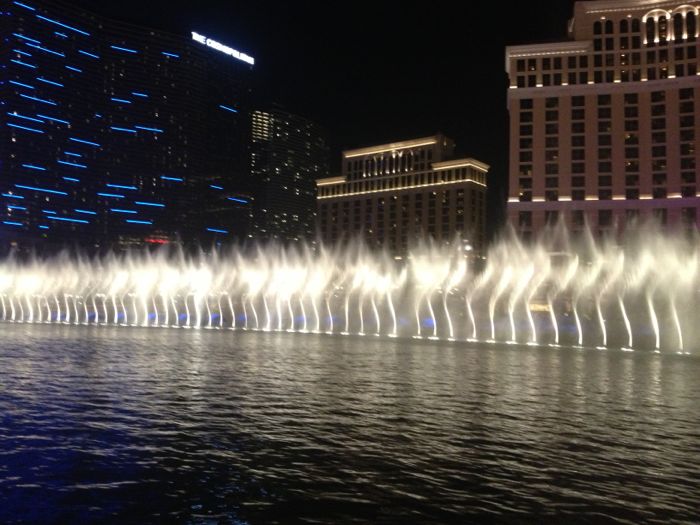 Hanging out on the Strip after we got hitched. (Photo: Liz O.)

We were on-again/off-again for the first few years, but solid by 2001. Still, more than a decade passed between the proclamations of undying love and the nuptials. We had talked about marriage, but there was always something in the way.  Bad jobs. Grad school. My dad’s illness and eventual death. More bad jobs. No jobs. Maybe we would never find eternal happiness in the eyes of the law. Maybe we were fine just the way we were.

In the end, it was another lousy situation that pushed us to Vegas. I was going to lose my health insurance. We did the research. Just because you’re domestic partners with someone– just because you’ve been with this person for most of your adult life– doesn’t mean that you’re necessarily enough of a domestic partner to get on his/her insurance plan. You have to be registered with the state for that, at least in our case. In California, you can only register as a domestic partner if you’re a same-sex couple or are old. We are neither. Marriage was the only option and we had to do it fast. We looked into eloping in L.A. You had to go one day to get your license and then come back on a Friday for the ceremony. That seemed tedious. We might as well cross the state line to make this relationship legit.

I know this sounds like the most boring reason ever to get married, and maybe I shouldn’t even mention this part of the story. The fact is, though, that this was how we ended up in a sad sack County building in the land of the quickie marriage. This was how the World’s Longest Courtship morphed into the World’s Shortest Engagement.

Once we exited the Marriage Bureau, random people ran towards us with well wishes and flyers. There are a lot of wedding chapels in this neighborhood and their street teams promote the venues as though they were the hottest nightclubs in the city. It’s a quirky thing about Vegas. There are flyers for everything: nightclubs, wedding chapels, hookers. We glanced at the advertisements, but ultimately settled on a small castle across the street. It was the only chapel that didn’t look like it could double as a sex shop.

There are a myriad different wedding packages available in Las Vegas. Much to our dismay, Elvis was not on the premises when we stopped by the chapel. We briefly considered a drive-thru option, but figured our wedding should be a little different than the In-N-Out lunch we had in Apple Valley earlier that day. Instead, we chose a courtyard wedding. It was small and private, just us and the minister inside a gazebo as a witness watched from somewhere else. I’m not even sure who our witness was.

My memory is hazy. I can’t tell you what the reverend said. I can’t remember how I responded to anything or how Carlos reacted. All I remember was absolute peace and happiness. For the first time in my life, my mind was quiet. I wasn’t thinking about everything that needs to be done. I wasn’t dwelling on every mistake I ever made. I was’t struggling to make things perfect. I was just staring at the guy that I’ve loved since I was a college girl, the guy who was now, officially, my partner until death. Oh my God, is this that thing called bliss?

After the wedding, we headed back to to Paris, where the music was all Jersey Boys all the time. “December 1963” was playing when we took the elevator downstairs.

“Do you know what this song is about?” Carlos asked.

“I think it’s about a guy losing his virginity to a hooker,” I answered.

We’ve had this conversation countless times. Now, though, we will forever associate “December 1963” with our wedding.

We went for a walk along the Strip. I started ranting, “People spend billions of dollars creating the most ridiculous place on the planet and everyone’s walking around in shorts and flip-flops…You’ve got to class it up or camp it up.”

“Sure,” I said before rambling a litany fashion crimes on the Strip.

Life was back to normal, except that we were married now.