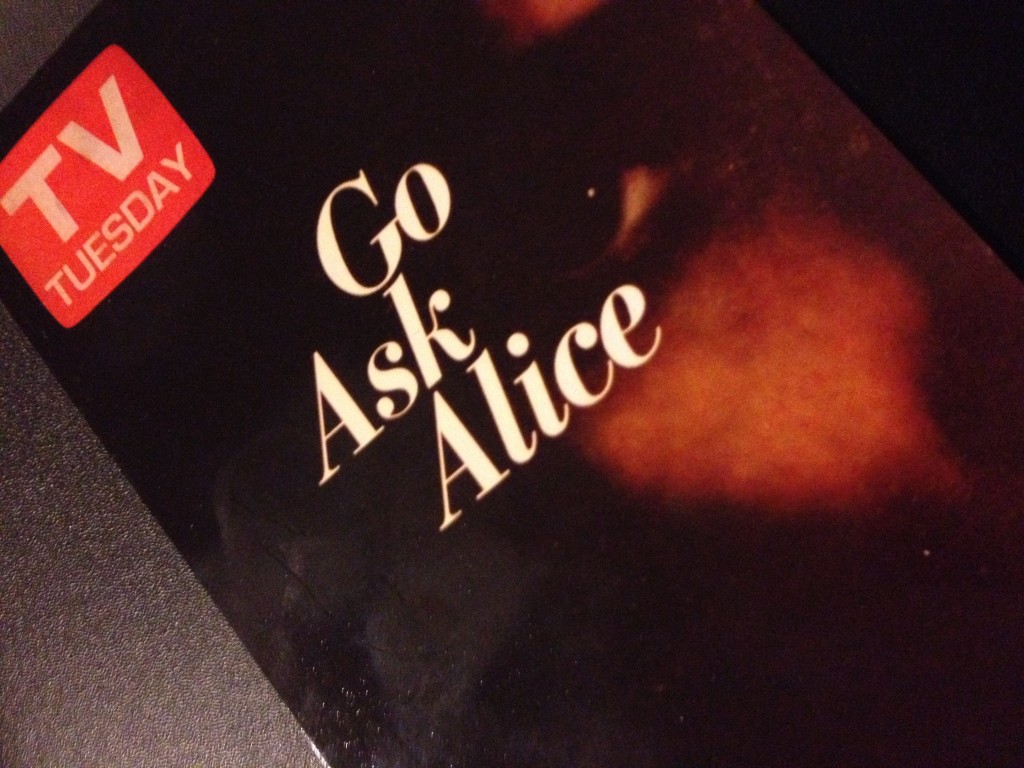 If you’re anti-spoiler and haven’t read the book or seen the movie, proceed with caution.

I don’t know how I went my entire life without seeing the made-for-TV movie based on Go Ask Alice, but we remedied that situation tonight at Cinefamily. As a boob tube aficionado, I really ought to attend their TV Tuesday events more often. It’s a shame that I missed the 21 Jump Street event a couple months ago. You can bet, though, that I won’t skip next month’s G.L.O.W. documentary.

But, back to Go Ask Alice. I humbly consider this book by Anonymous to be a work of genius. Don’t give me that lecture about how it’s probably not really a teenager’s diary. Even as a 12-year-old who only knew about drugs from the fried egg commercials, I understood it as fiction. That’s probably because I bought it in the same section of B. Dalton’s where I picked up my monthly editions of Sweet Valley High. It doesn’t matter if it’s real or not. It was frightening in the same way that Christopher Pike books were. It was as terrifying as that Sweet Valley High where Elizabeth Wakefield volunteers at the hospital and gets kidnapped. I think it’s called Kidnapped. In other words, it plays on the fears of kids who are too young to know how boring high school really is.

Frankly, Go Ask Alice scared the crap out of me. I think the book is the reason I never tried LSD, not because of the narrator’s ultimate fate, but because of the worm trip. To this day, I can’t think of LSD without getting images of worms and bugs crawling all over me.

I haven’t read the book in well over a decade, but those passages live with me, usually in my nightmares. The movie is nowhere near as disturbing. It’s a TV flick, so a lot of the most gruesome scenes exist only as allusions. What the movie does have, though, is William Shatner, with an epic mustache, as Alice’s dad and Andy Griffith as a priest who tries to help the young girl. The movie came out in 1973 and that’s apparent for more than just the fashion. How could Alice’s parents have no problem with their 15/16-year-old daughter dating her father’s TA? So creepy.

Everything I love about cheesy TV is in this movie, the petulant teenagers who look way older than the age they’re playing, the characters who pop into the scene without ever being remotely developed, the unintentionally hysterical one-liners and the overly dramatic exits. If you ever listened to Paul F. Tompkins’ Go Ask Alice rant, you might recall him comparing it to Dragnet. Well, I immediately loved this for the same reason I immediately loved the “Blue Boy” episode of that classic series. I love that they don’t even try to understand the youth culture that’s represented in the work. The culture is simply a catalyst for some worst-case-scenario morality tale.

Now, I really need to find my copy of the book and re-read it. The same goes for Jay’s Journal.

2 thoughts on “Go Ask Alice: The Made for TV Movie with William Shatner and Andy Griffith”