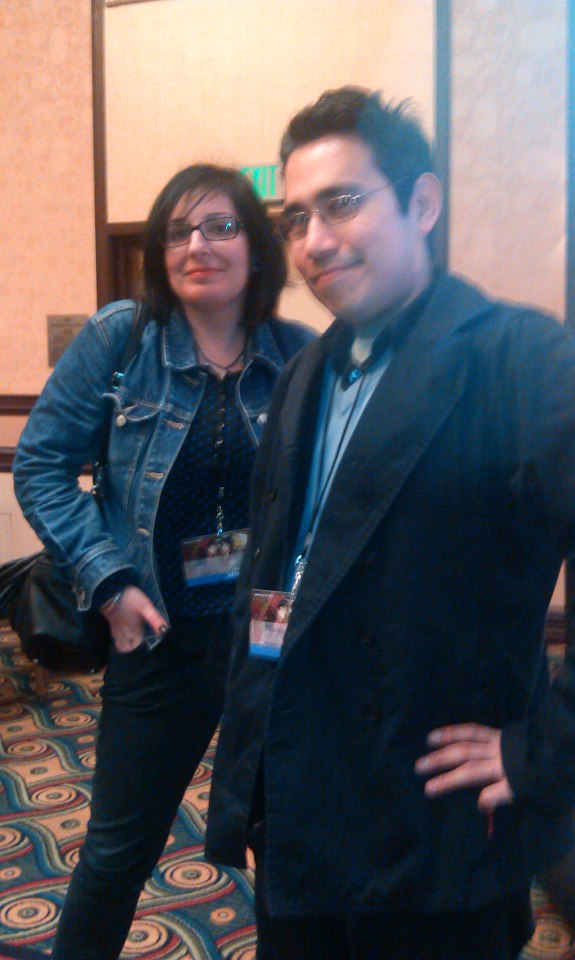 Ran into Mike from Cel Count Media at the Ghost in the Shell: Stand Alone Complex panel. (Photo: Jenny Park)

I almost didn’t go to Anime L.A. this year. I had been getting worn out from covering convention after convention. I was thinking that maybe I should take a break this year. But, ALA is a special con for me. It’s the first one I attended, way back when they were throwing the party in the Valley. I wrote about the experience for Razorcake years ago. I went looking for Paranoia Agent DVDs. I came out of there obsessed with conventions.

Mostly, though, I went for the Ghost in the Shell: Stand Alone Complex panel. I’m a bit of a GITS fan and I wanted to write about it for my L.A. Weekly column, Cult Stars. I did that. There will be more tales from ALA coming soon too.

I ran into podcasters Mike and Jenny, from Cel Count Media, at the GITS:SAC panel. That’s Mike in the photo with me. Jenny snapped it. They’re cool people. I need to hang out with them more often. I bumped into a few other convention friends while I was there. It was good fun.

There’s a funny thing that happens a lot at conventions. People question why I’m there. Is the reporter really into this stuff? I get it. Everyone is a little protective of their scenes. But, I also dislike feeling a need to prove my nerdiness at ever con. Fortunately, that didn’t happen at ALA this year. I can only chalk that up to the fact that I’ve been there every year for at least half a decade.

I’m an anime fan. I might have been one before I even knew what that meant, before it even dawned on me that there were conventions and that people dressed up as their favorite characters. I don’t cosplay. It’s doubtful that I ever will. I don’t stock up on merchandise at conventions. I’m also not fanatical about keeping up on the latest anime. If someone were to ask me right now what my favorite recent series are, I would say Tiger & Bunny and Puella Magi Madoka Magica. In the fast-paced world of Japanese animation, those titles are now old. I don’t care. But, at least now you know, the shows that I write about in my column are actually the shows I watch.

For my non-journalistic writing, the stuff that I’ve been doing for years, but keeping sort of hidden, anime is a big influence. Honestly, I might have left creative writing behind forever were it not for The Melancholy of Haruhi Suzumiya. I was awestruck by the storytelling in that series, so much so that it pushed me to not be all non-fiction all the time.

Anime holds a special place in my creative world because it’s shown me how many different ways you can tell a story with drawings. It doesn’t have to have superheroes. If it’s funny, it doesn’t need to be episodic. And, more importantly, there is plenty of room for female characters. So I go to these conventions for two reasons. One is to report, the other is to get inspiration for the stuff you haven’t read yet.