We had a great night at Underground. Thanks to everyone who came out for a little Friday night dancing. My next gig there is March 8. This will also be the release party for Los Animales, the webcomic that Jeaux J. and I make. (Yes, it’s online now. Catch up here.)

Here’s what I played tonight.
END_OF_DOCUMENT_TOKEN_TO_BE_REPLACED

The Smiths– What She Said

Adam and the Ants– Ant Music

Siouxsie and the Banshees– Slowdive

Human League– Don’t You Want Me 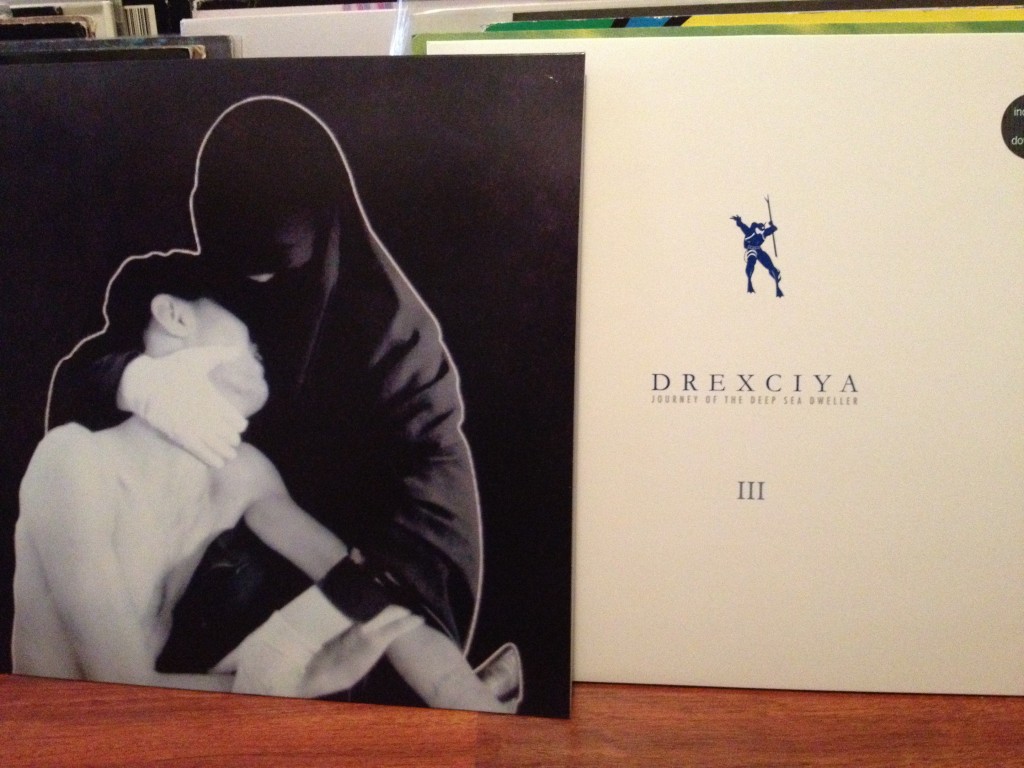 As much as I love digging through the bins at every L.A. record store, I also order a lot of my records online. This is mostly because I like getting physical mail. Also, Amoeba sometimes sends out coupons that are only good for the online shop. These are my most recent purchases, which I picked up yesterday.

The record on the left is (III), the new one from Crystal Castles. I’ll probably be playing something off of this at my gigs soon, though I don’t know if soon means tonight.

I also picked up Journey of the Deep Sea Dweller III. This is from the Drexciya reissue series released by Clone Classic Cuts. If you’re a techno fan, you probably well aware of Drexciya’s impact. If you have never heard the name before, here’s the Wikipedia entry to get you started, but, really, you should read this blog post. This is good stuff. I still need to get the first two installments of the series.

Reminder: I’m playing at Underground tonight. RSVP on Facebook for free entry before 10 p.m., $5 cover after 10 p.m. The cover is $8 without the RSVP. 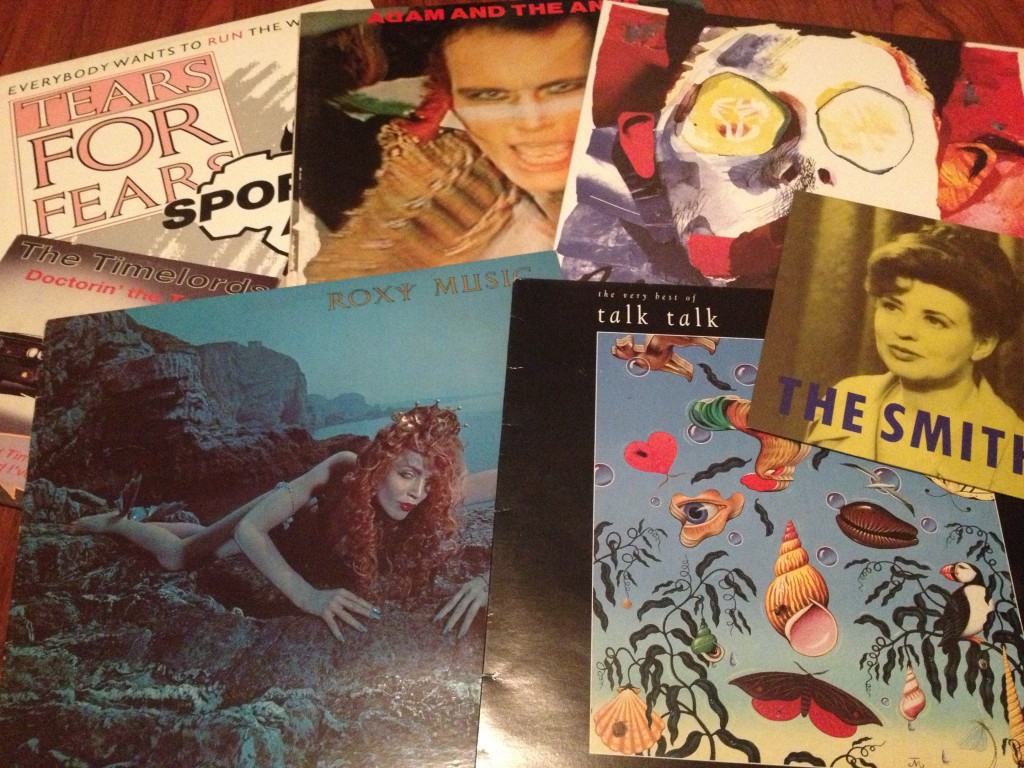 I had to drive out to the Westside for an interview today, so I decided to swing down towards the airport and stop by one of my favorite record shops, Soundsations. Thanks to a Christmas gift certificate, I was able to pick up some stuff I didn’t have on vinyl. Here’s the breakdown.

Tears for Fears “Everyone Wants to Run the World”

I’m not really sure what this is, except that it’s a single and it looked interesting. Soundsations has a lot of Tears for Fears vinyl right now. If you’re looking for something, check out their stash.

Adam and the Ants Kings of the Wild Frontier

I don’t know why this isn’t in my collection. It should have been there. And, it is now. The cover is a little thrashed, but the vinyl is fine.

I actually bought this on cassette back when it was released. A few years later, I upgraded to CD. Now I have it on three formats. That’s how good this album is.

Again, how was this not already in my collection?

The only Talk Talk vinyl I had before today was the “It’s My Life” 12″ single. I know, best of albums aren’t all that cool, but it works for what I need.

The Timelords “Doctorin’ the Tardis”

If you’ve heard me play this at gigs before (I think I played it at a pre-SDCC party at Meltdown) it was thanks to my wonderful boyfriend, who has the 12″ single. Now I have my own copy, on 7″.

I love this song. It’s nice to have a single of it. 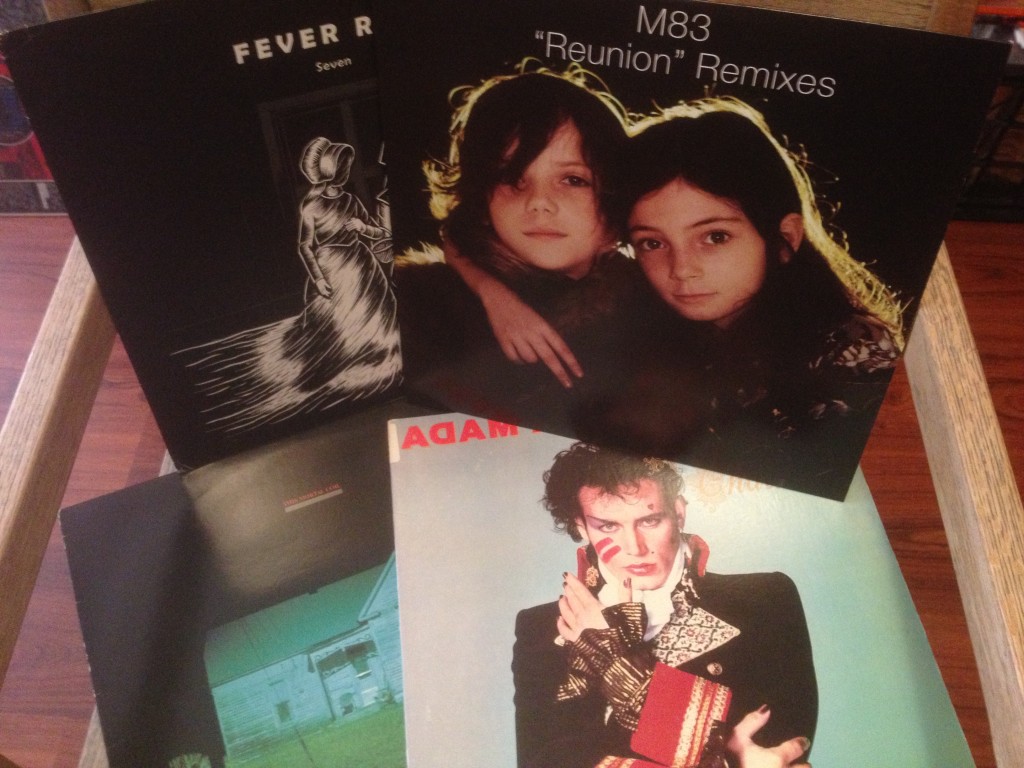 It’s been a few weeks since I’ve played my records, so I’m excited to be on the decks at Underground this Friday.

I have no idea what I’ll play. It might be something from this stack. I’ve been wanting to play Adam and the Ants lately, but I haven’t gotten around to it yet. This Mortal Coil’s cover of “16 Days/Gathering Dust” did pretty well when I played it back in December, so I might give that another spin. Out of all the “Reunion” remixes, I’m smitten with Mylo’s take on the M83 track. Maybe will hear that too. As for Fever Ray, I’m into the CSS remix of “Seven” that’s on this 12″ single. Maybe I’ll play that too. Who knows? Just make sure you’re there.

If you’re on Facebook, RSVP for free entry before 10 p.m./$5 entry after 10 p.m. (good for you and one guest only). Also, if you want to celebrate your birthday party at Underground, email clubundergroundla@gmail.com for details. 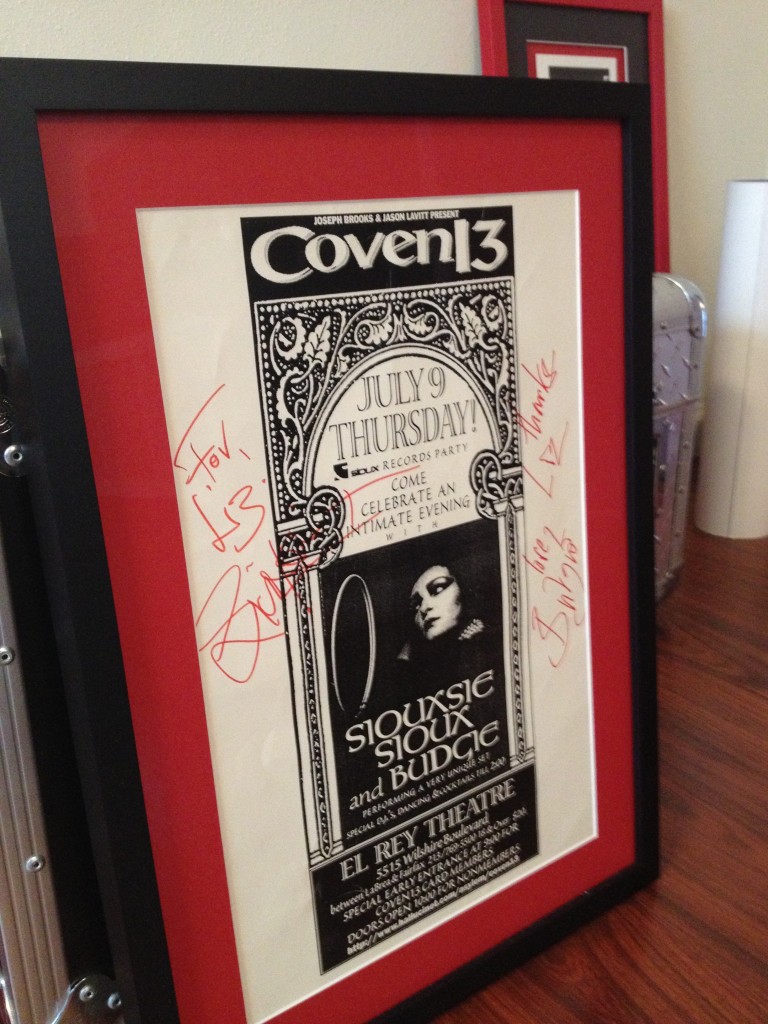 Siouxsie and Budgie ephemera that I need to hang, dating back to the 1990s.

There’s this post on Buzzfeed called “35 Signs You Grew Up in Los Angeles in the ’90s.” I caught wind of it from my friends Jeaux and Roo. It’s funny. It’s true. It’s also likely written by someone who was a kid in the 1990s. I wanted to add some stuff for those of us who went through middle school, high school and college during this decade.

1. You learned how to drive during El Niño. And then you braved the storm for every concert you couldn’t miss.

There was this wave of lousy, rainy winters called El Niño. When you’re a little kid, rain is fun. Once you hit your teens, though, you realize that Los Angeles was not built for less than awesome weather. It doesn’t take much for the streets to flood, which is a bit of a nightmare when you’re learning how to drive. Fortunately, I was able to use this as an excuse to ditch school. “But, I can’t drive in this weather! It’s totally not safe.”  However, I did get over my fear of rain driving when it came time to hit up clubs and concerts.

2. You had to explain Retail Slut and Vinyl Fetish to your parents.

“Mom, I really need to go to Vinyl Fetish and Retail Slut this weekend.”

She stares at me like I’m out of mind.

I got my ride. Got some music. Retail Slut was kind of pricey. I got some band stickers for my goth box.

3. You saw Drew Barrymore at clubs more than once.

If there were clubs that catered to celebrities back in the 1990s, I didn’t know about them. Every once in a while, we would spot a few at our own clubs, which maybe made us respect the actors/models/etc. more. I remember Drew Barrymore showing up at more than a few places I frequented. I think just about everyone who went to the clubs in the 1990s has an “I totally saw Drew Barrymore last night” story.

4. You saw some band that was in Sassy Magazine at Jabberjaw.

Usually, this band involved either Ben Lee or Ian Svenonius. Bonus points if you saw a cast member of My So Called Life in the crowd that night.

Who says that goths and ravers can’t be friends? We all went to Perversion and Velvet and sometimes even Kontrol Faktory together. On Wednesday nights, though, we had to part ways. For us goths, there was Helter Skelter. The PLUR kids went to Magic Wednesdays. Maybe after last call we would meet up at the (sadly, now defunct) Del Taco on Santa Monica and Highland.

6. You were addicted to Request Video. And probably the Hot Seat too.

Back in the early 1990s, us L.A. kids got our fix of music videos and lulz thanks to KDOC, which was actually based in Orange County. Thanks to Gia Desantis, we caught all the new clips from Skinny Puppy and Ride. We might also get a little local music gossip from Belissa Cohen.

Right before Request Video was the Hot Seat, where conservative talk show host Wally George would get into it with, well, pretty much everyone. It was hysterical, but you kind of had to be there.

7. You met Rodney Bingenheimer and totally freaked out.

Back in the day, Rodney on the Roq was essential radio for any teen who wanted to know about all the hot bands in the U.K. I used to sit next to my radio early Sunday evenings, tape the show, go through it and hit up Tempo Records armed with my babysitting income.

When I first met Rodney, I was 15. I stood in line for his autograph when Siouxsie and the Banshees played Universal. Then I was like, “Oh my God, that James song you played last week. I think it’s called ‘Hymn from a Village.’ It’s so awesome. But, I can’t find it anywhere. But, it’s like the best song ever. Thanks for playing all the awesome music. I wouldn’t know anything if it weren’t for your show. Blahblahblahblahblah”

He played “Hymn from a Village” the next night and gave me a shout-out. It was, like, the best moment of my life, like, ever.

8. You stopped listening to Loveline when The Poorman left.

Does Loveline even exist anymore? I wouldn’t know since I stopped listening the day The Poorman left the show.

9. You stopped listening to KROQ when they started playing more Metallica than Morrissey.

I don’t even need to elaborate on this.

Not that you really remember the ’80s as anything more than a time to play Voltron, but new wave was infinitely better than grunge. 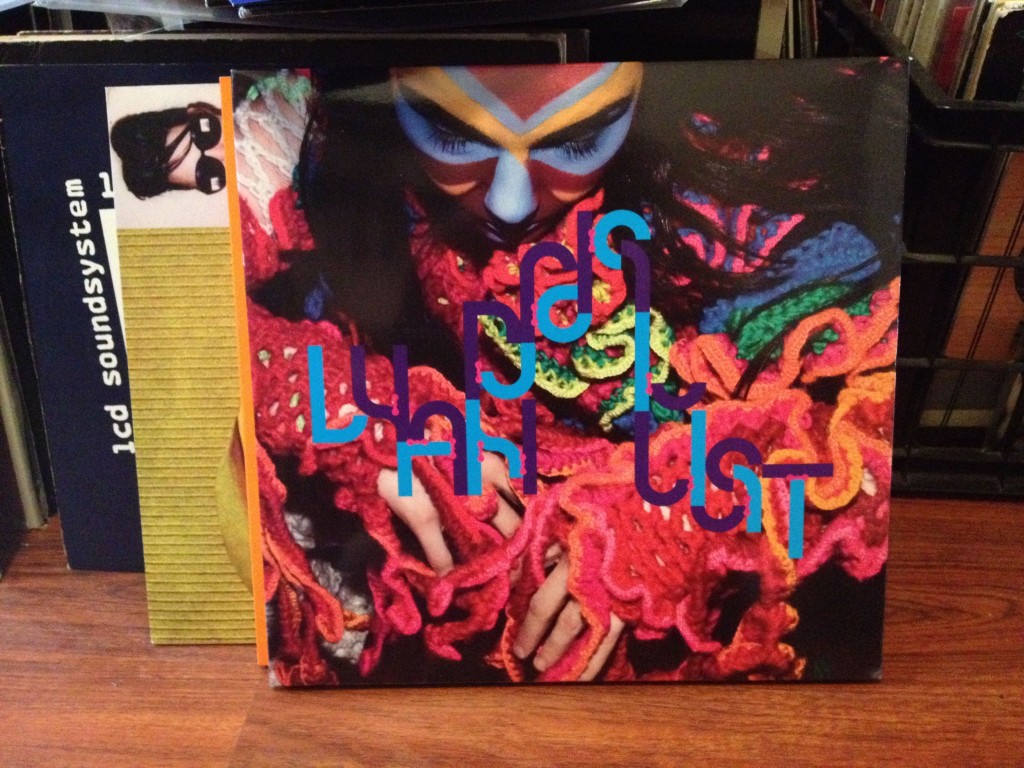 I can’t recall how much time passed before I worked up the nerve to open up my “very very limited edition” Bjork 12″ of “Wanderlust.” I knew I wasn’t going to be able to open up the sleeve without ripping the sticker. I didn’t want to rip that sticker. Eventually, though, I could no longer resist the urge.
END_OF_DOCUMENT_TOKEN_TO_BE_REPLACED